For over 10 years, CDW has assisted the City of Chelsea in environmental aspects of its successful urban parks program. These small spaces are tucked into residential neighborhoods, where empty lots or post-industrial dumping grounds once divided communities. CDW provided site assessment, testing, remediation services, and regulatory compliance to bring these under-utilized and unhealthy spaces to positive re-use, giving children a safe place to play, and the community a place to enjoy. Three notable projects include:

Box District Park was originally covered by tidal flats of the Chelsea River until it was reclaimed in the 1800s. After the land reclamation, four two-story residential buildings occupied the site until the neighborhood was destroyed by fire in 1908. The parcel was then tenanted by the American Popcorn and Potato Chip Co., followed by two milk depots. In 1973, the site was purchased by Sudbury Brass Goods Co., which used it to manufacture brass ornaments and fixtures until 2011. The long industrial history contributed to the environmental contamination of the site, which had to be remediated before the parcel could be developed.

Creekside Common occupies one acre of land, once part of the old Parkway Plaza, a 34-acre site that until recently was an abandoned shopping center. Portions of this commercial area were developed on a former landfill and historic clay pit. With a well-developed community vision and massive community involvement, the project resulted in an interactive play space with a continuous waterfront walkway along Mill Creek. Contaminated soils were managed within the design scheme to maintain the required 3 feet minimum cover.

Island End Park is an approximate 7,000 square foot man-made peninsula of land at the northern end of the Island End River. CDW completed a subsurface investigation and identified contaminated soils at depths exceeding 10 feet. Detailed site research and reviews of historic maps and atlases indicated that the land under the Site was fill material placed in the mid 1960’s over river sediments contaminated by coal tar from a nearby disposal site. CDW prepared a detailed conceptual site model and risk characterization which was used to achieve regulatory closure. The new park was constructed and completed within the schedule; access by the public is unrestricted. 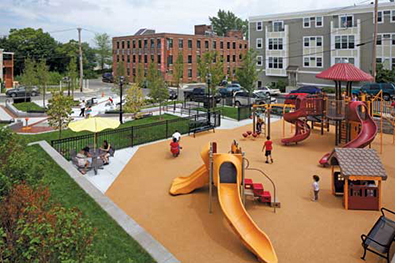